Mental Health: to help, you must first understand 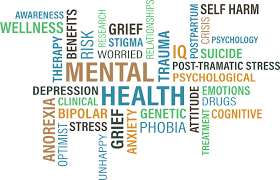 Mental health is not just limited to depression and anxiety, though that is what most people associate it with. There are so many different types and ranges it's nearly impossible to really understand them all, but just knowing more than the usual is a start to learning how to cope with them.

*This is part one of a three-part series on mental health among teens.

The idea of mental health struggles is a touchy subject. No one likes to talk about it, some feel it is just a way to get attention and others are just ignorant to the struggle. But has anyone thought to ask the ones who live with these struggles, forcing their way through life, usually alone?

“It’s really hard to try and find inspiration to do things and sometimes I’ll just start crying out of nowhere because everything is just so bottled up and pinned up cause I’m scared to talk about it,” Ella Connell, senior, said.

Mental health is not just limited to depression and anxiety, though that is what most people associate it with. There are so many different types and ranges it’s nearly impossible to really understand them all, but just knowing more than the usual is a start to learning how to cope with them.

Start with the most common: depression. Almost everyone recognizes the word, but not many understand what it is. On a scientific level, depression is a chemical imbalance in the brain. This description however, does not accurately reflect the true meaning. In reality, there is no definition. Depression is different for every person who has it. For some it is a constant hate of yourself, and others it is a darkness that looms in the back of your mind. For all though, it affects their daily life, always changing how they feel, and a lot of the time, how they act.

“Well with the depression, I won’t want to do things, I won’t see the point in doing anything,” Connell said. “I kinda just want to crawl up into a ball and die.”

Then there is anxiety.

“I struggle with social anxiety and gender dysphoria, along with depression,” Caleb Hoosier, freshman, said.

Anxiety is a normal and often healthy emotion. However, when a person regularly feels disproportionate levels of anxiety, it might become a medical disorder. Anxiety disorders form a category of mental health diagnoses that lead to excessive nervousness, fear, apprehension and worry.

And then there are mental illnesses like bipolar disorder and schizophrenia.

Bipolar disorder is a mental health condition that causes extreme mood swings that include emotional highs and lows. When you become depressed, you may feel sad or hopeless and lose interest or pleasure in most activities. Schizophrenia is a disorder that affects a person’s ability to think, feel, and behave clearly.

While depression, anxiety and the other disorders are at their roots mental health issues, sometimes they can manifest themselves in physical ways. One of the most common manifestations is self-harm.

Self-harm is many things, however, the most common is a coping mechanism. Whether it be cutting, burning, or any other way to create pain, self-harm is used as a way to ground yourself, to distract your brain from the darkness of depression. Most people use it during episodes as a way to calm themselves down. The act of causing yourself pain releases serotonin, a happy chemical. This soon leads to an addiction, and self-harm becomes more about that serotonin then a coping mechanism.

While self-harm is a coping mechanism, it is not a healthy one. There are, however, healthy coping mechanisms that, if not over used, do help. Working out, listening to music, journaling, drawing, all of these are methods to help cope with mental health issues.

“I know how to control my breathing when I’m having a panic attack,” Hoosier said. “I know what to do, like going into another room, walking, counting, grounding myself.”

Whether it is depression, anxiety, or self-harm, mental health is majorly misunderstood. A lot of the time it is seen as a way to get attention or as that person being over dramatic. However, none of the stereotypes are true.

“Back in junior high the person that I told everything to at one point said that I wasn’t depressed, that I was just faking it and then I went away and she thought I was dead,” Connell said. “I went away for four months.”

One major stereotype is that people who struggle with mental health are fragile and need to be treated as such. This is not true, and can end up making a person feel more alone in their struggles.

For most, school can either make mental health worse or better. Some say it’s the cause of their depression or anxiety, while others say it is an escape and a place to be someone new. However it is viewed, almost everyone feels strongly about one thing though, the adults on campus aren’t very helpful when it comes to mental health struggles.

“I think that teachers should be more aware that it happens to more people than they think,” Connell said.

Though students might not see it, there are many people to talk to on campus besides their teachers. They can always go to their counselor or one they feel closer to, and they can check in with the nurse.

“As a teacher I am happy to listen to and talk with my students who might be struggling with mental health issues but, since I am not educated in how to truly counsel them, I will talk to their counselor who will then make time to call that student in,” Emily Miller, journalism teacher, said. “We teachers do know the struggle of high school and most of us have an open-door policy to talk.”