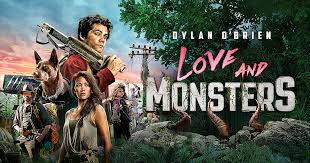 After living underground for seven years, Joel Dawson decides to face the monsters to get to his high school sweetheart. Staffer who tuned in just to see the lead actor ends up enjoying the movie.

When I saw that Dylan O’Brien was the lead in “Love and Monsters” I knew I had to see it. He is my favorite actor because he stars in the Maze Runner movies that are incredibly good.

The movie begins with all of humanity living underground after the Monsterpocalypse when giant creatures took over the land. It has been seven years and Joel Dawson (O’Brien) realizes that there is nothing else left for him under the surface. After reconnecting with his high school girlfriend, Aimee (Jessica Henwick), over the radio, he decides to set out on an 80 mile adventure to find her. Along the way, he befriends Clyde (Michael Rooker) who lost his son and is now taking care of Minnow (Ariana Greenblatt). Together they battle monsters in a fun-filled, action-packed movie.

The movie is really good. I personally like post-apocalyptic movies which is why I was so excited to see this when it came out. The creatures are really creepy in a way that I felt that they were real. I think this movie should be on everyone’s watch list for sure.

It can be seen in theaters that are open during Covid but I paid $20 to watch it on YouTube.